GIVE US A CALL

The summer of 2021 has produced several challenges to beef production with drought, poor pasture conditions, high hay and feed prices. Management decisions must be made to stretch available forage and explore options to supplement deficiencies due to drought to maintain animal performance and health. Dormant pastures will be deficient in protein and energy which will impact lactation, breeding efficiency and performance of growing calves.

The rumen is an amazing digestive structure that converts forage material into high quality protein and energy by microbial fermentation. However, during drought conditions or when feeding mature or poor-quality roughage, digestion in the rumen is slowed and intake is reduced unless supplemented with more digestible carbohydrates.

Feed intake is affected and dependent on the rate feeds can be digested, in other words, the rate of passage through the rumen, i.e., as the rumen empties, more feed can be consumed, more nutrients are digested and become available for production needs.

Maintaining good rumen function refers to keeping the fiber digesting microflora at an optimum level to digest the feed and convert it to usable energy. When feed prices are high and forage quality is low, maintaining feed efficiency becomes one of the most important goals for profitability and performance of the beef animal. 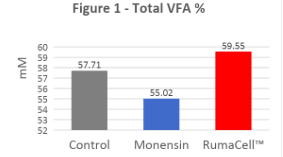 Research at the University of Georgia (Figure 1.) shows that feeding 5 grams per head per day of RumaCell™ will maintain optimal rumen function and production of total volatile acids (VFA) which is the primary energy source for growth. The RumaCell treatment produced 59.55 mM of VFA compared to 55.02 mM from the Monensin treatment, a 4.53 mM increase or 8.2% additional VFA.

When the rumen is functioning at its best, forage will be utilized more fully which improves efficiency, reduces feed costs, and improves growth and performance. RumaCell, a lactobacillus fermentation product from Pacer Technology is a good choice to help maintain feed efficiency, animal performance and health.

Research Documents the Value of RumaCell™

RumaCell impacts rumen function in several positive ways which contributes to the performance improvement over Monensin.

First, RumaCell supports an optimum population of rumen microflora that digest the feed components yielding microbial protein, amino acids, and volatile fatty acids (VFA) which are the major energy sources for the animal. This mode of action of RumaCell is responsible for the higher VFA production compared to Monensin. 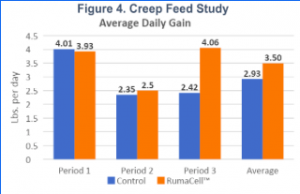 Figure 4. shows creep fed calves at the University of Georgia, had an increased average daily gain of .57 lbs. per day for RumaCell calves fed 5 grams per head per day.

Over the 63 day trial RumaCell fed calves were 35.9 lbs heavier than the control.

Support the Growth and Function of Fiber-Digesting Microorganisms

Cattle and calves on dormant pasture and poor-quality forage can benefit from feeding RumaCell by supporting the fiber digesting rumen microflora for optimum efficiency.

RumaCell, an all-natural  lactobacillus fermentation product contains prebiotic and bioactive metabolytes produced during the fermentation process which supports the microbial populations of the rumen and intestine. When the rumen microflora population is optimum, cattle are more efficient in their digestion and adsorption of essential nutrients for gain and performance.

In vitro studies conducted at the University of Georgia indicate RumaCell fed at 5 grams per head per day produced more total VFA than Monensin.

Figure 5. shows that  RumaCell produced more total available energy by increasing of all VFA’s 4.5 mM or 5.9% more than Monensin. The improved rumen function and increased VFA production provides the additional energy for the improved performance of RumaCell compared to the ionophores Lasalocid and Monensin.

Include RumaCell in your summer feeding program for gaining digestion efficiency from the drought stricken and expensive feed stuffs. RumaCell is available in liquid and dry crumble or pelleted form and can be added to liquid supplements, blocks, minerals, and dry feeds.

If you have questions about our products or would like to speak to a sales representative, please get in touch with us.

The next generation of animal health - fermentation products for the agriculture industry.